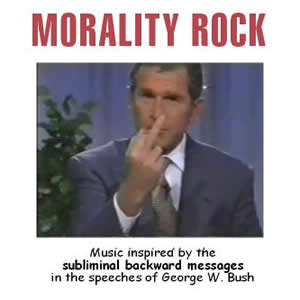 George W. Bush may have vacated the White House, but his music lives on. Morality Rock is music inspired by the subliminal backward messages in the speeches of the former U.S. President. As heard on the Dr. Demento Show and on progressive radio stations around the world, this recording elevates President Bush to backwards music superstardom, joining Led Zeppelin, the Beatles, Queen, Meat Loaf and countless other rock artists whose lyrics were condemned by conservative politicians and church leaders in the 1970's and 80's due to their allegedly containing subliminal backwards messages. When played backwards, the President refers frequently to Satan, explicitly describes homo and heterosexual acts, and enthusiastically endorses marijuana. Morality Rock captures it all, and sets it to music. Musically, there's something here for everyone - classic rock, dance/techno, accoustic folk, reggae; with lyrics and backward vocals provided by the President.